Hilarious hero, Deadpool returns for an even funnier sequel;  delightfully jam-packed with both cinematic and comical surprises

DP’s greatly awaited sequel was finally united with the big screen on the 16th May in record-breaking fashion – and rightfully so. Boasting a radical plot, plenty of cinematic delights and even more gags, the film continues to win over the opinions of critics.

“At least as funny as the original Deadpool, and better in virtually every other respect: better plot, better villains, a few unexpected narrative swerves.” – The NYTimes

Alike the original, this film continues to break the conventional expectations for super hero films, with Ryan Reynold’s character at the center of it all; who is certainly familiar with digging into the pop culture with jokes, references and hilarious scenes. 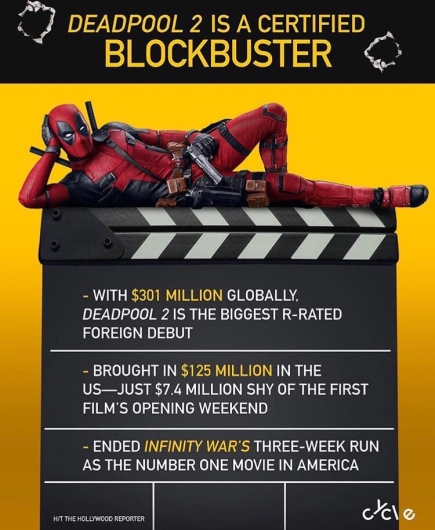 Besides from Deadpool’s personality, we get to meet a number of awesome characters, including Cable – a time-traveling cyborg from the future (Josh Broslin); Domino – a living, breathing lucky charm (Zazie Beetz); and Juggernaut – a giant with overwhelming power (Ryan Reynolds).

The film can be considered confusing towards the end, where time traveling appears to be an increasing normality among the MCU. So, regardless of the multiplying deaths and anticipations, the future of the franchise, and its beloved Deadpool can almost write their own paths.